Gene Ferguson is a family lawyer with extensive years of experience. If you have legal issues, please trust us to defend you.

Our lawyer was born in Trenton, MI to Gene Sr. and Helen Ferguson. His parents owned many restaurants in Downriver, including Kellepourey’s House of Barbeque, Fergie’s Fish and Chips, and Helen’s Seafood.

A graduate of Trenton High School in 1973, Gene strove to pursue a career as an attorney. He completed his BS in Business Administration degree in 1978. In 1983, he received his Juris Doctor degree from the Detroit College of Law, which is now known as Michigan State University College of Law.

That same year, Gene passed the Michigan Bar Exam. He has achieved his life goal to become a lawyer and since then, he has served Downriver and its surrounding areas.

Gene and his wife, Diane, have been married for more than 30 years and have 6 children. Diane works as our law firm’s legal assistant, which is why we are also referred to as Ferguson Family Law as we are literally operated by a family.

We provide our legal services in several cities in the state of Michigan, such as: 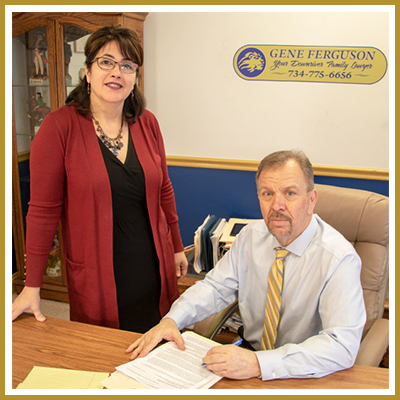